Header title
A NEW REVOLUTION IN THE WORKING WORLD

With the freelance economy continuing to grow by leaps and bounds, purchases of intellectual services are one of the top expenditure items for large companies and the latter are increasingly relying on the specialized expertise of independent professionals.

In 2013, having fully grasped this emerging market’s challenges and opportunities, Vincent Huguet and Hugo Lassiège to found Malt (originally known as Hopwork), an end-to-end marketplace where companies and organizations find the right freelance talents to match their business’ needs.

Malt’s business model is diametrically opposed to those of its competitors, which tend to function via reverse bidding systems where freelancers are pitted against each other. With Malt, in order to avoid unfair competition from offshore, low-cost service providers, it is the potential clients who contact the candidates registered on the marketplace. Malt does not require freelancers to pay a subscription fee to use the platform and it aims above all to meet their real needs by guaranteeing them financial security and simplifying administrative procedures.

Once the freelancers have filled out their profile and set their rates at their own discretion, potential clients enter the types of skills they require, then the algorithm proposes a list of freelancer profiles matching their request. The algorithm bases its selection mainly on the number of assignments completed by the freelancers, their total earnings via the platform, and the comments they have received on previous assignments. Once the assignment’s completion has been validated by the client, Malt pays the freelancer within 48 hours. The scale-up also offers solutions to manage relations between clients and freelancers, from the preparation of the brief up to the processing of the payment for an assignment.

As for its economic model, the start-up deducts a service fee of between 5% and 10% from the payments sent to freelancers. Working for a single client on multiple assignments lowers the service fee charged to the freelancer. Clients also pay a service fee, depending on the volume of assignments arranged via the platform.

A FUNDING ROUND FOR A MAJOR TURNING POINT

In the post-pandemic economic and social context, Malt has emerged as a central player in the transformation of the labor market, with all the elements in place to deliver exponential growth. As evidence of this, the report issued by French National Assembly member Mounir Mahjoubi on employment in the country via online work platforms in 2021 ranks Malt as the No. 1 platform in terms of its impact on society and its engagement on behalf of workers, with a score of 18.5 out of 20.

Having already raised more than €32 million since its founding in 2013, Malt raised a further €80 million in June 2021 to strengthen its leadership position in the European freelance consulting market. Eurazeo, which was already a Malt investor through its Venture division, took part in this growth equity funding round, alongside other long-standing as well as new investors. This funding has enabled Malt to invest further in its tech platform and its product range, to continue its European expansion, and to pursue an acquisition strategy to ramp up its growth.

Of the nearly one million freelancers in France, between 600,000 and 700,000 of them work in tech fields. In Europe, the latter number about 6 million. It is for this reason that Malt is firmly set on continuing its European expansion. Having already opened offices in Madrid, Brussels, Amsterdam and Munich, the company is now eyeing a wider presence in Western Europe.

In March 2022, one month after being named to the Next40 index of the most promising French tech start-ups, and with the support of Eurazeo’s teams, Malt acquired the Berlin-based consulting marketplace Comatch. Present in nine markets, this platform’s 15,000 independent management consultants and industry experts have strengthened Malt’s community of freelance talent.

The strategy behind this acquisition is to become the No. 1 player in this sector, with a value estimated at €355 billion in Europe. By adding Comatch, Malt now works with more than 80% of CAC 40 and DAX 40 members and with a total of over 1,000 large corporations. Malt aims to be the preferred partner providing access to independent talent for all major multinationals on an international scale within five to ten years, reaching a business volume of €1 billion by 2024.

More than 100 professions in consulting and digital services represented 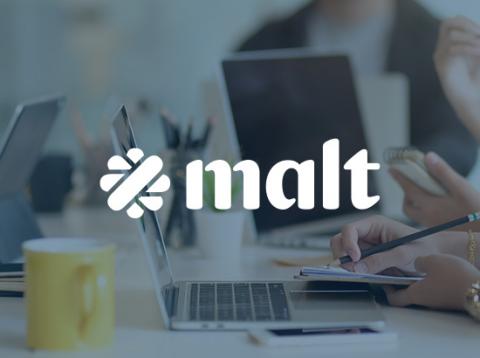